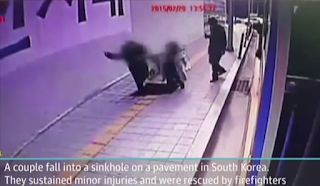 A man and woman had just stepped off a bus in Seoul when the pavement beneath them collapses and they fall 10 feet. The accident was captured on bus's CCTV. The pair were later rescued by firefighters after suffering only minor injuries. The sinkhole was next to a construction site where two blocks of flats are being built.