Helicopter and flying devices in Abydos temple hieroglyphics (around 1500 bc)

The history of Abydos is intimately associated with the political and religious development of Egypt itself and dates to the beginnings of Egyptian history. Excavations there at the end of the 19th century by Emile-Clιment Amιlineau and Sir Flinders Petrie uncovered a series of pit tombs, the stelae (standing stone slabs) of which marked them as apparently belonging to the kings of the first two dynasties of Egypt. Doubt has subsequently been raised as to whether these tombs were the actual burial places of the pharaohs whose names they bore: in Saqqarah, a series of mastaba tombs were found that contained objects bearing the same royal names, and the far greater size of these tombs and the richness of their contents and decoration have led many scholars to suppose that these are the real resting places of the early kings and that the custom of constructing a sham burial, or cenotaph, at Abydos was practiced as early as the Archaic period. Some of the 2nd-dynasty pharaohs, however, may in fact have been buried at Abydos, where imposing brick funerary enclosures were built at the northwestern end of the necropolis area; one of these structures covers nearly 2 acres (0.8 hectare).

The tutelary deity of the necropolis city was the jackal god, called Khenti-amentiu in the Old Kingdom; in the 5th dynasty, his cult was gradually absorbed by that of the god Osiris, and the city soon became the focal point of the cult of Osiris. Abydos became a place of pilgrimage for pious Egyptians, who desired above all else to be buried as close as possible to the recognized tomb of Osiris, which was located at Abydos. For those who could not afford the expense of being buried there, stelae were set up, inscribed with the dead man's name and titles and a prayer to the god. Thousands of these stelae have been found in the city's cemeteries.

The pharaohs, though they were now buried near their city of residence rather than at Abydos, encouraged the cult of the deified king at Abydos, and they took special care to embellish and enlarge the temple of Osiris there. Over the centuries the temple of Osiris was successively rebuilt or enlarged by Pepi I, Ahmose I, Thutmose III, Ramses III, and Ahmose II. Some pharaohs had a cenotaph or a mortuary temple at Abydos. The temple of Seti I was one of the most beautiful of all such temples. Its plan is unique, for it has no fewer than seven sanctuaries, approached through two broad hypostyle halls. The sanctuaries are dedicated to the pharaoh and the principal gods of Egypt. In a long gallery leading to other rooms is a relief showing Seti and his son Ramses making offerings to the cartouches of 76 of their dead predecessors beginning with Menes. This is the so-called Abydos list of kings. The reliefs decorating the walls of this temple are of particular delicacy and beauty. Only 26 feet (8 m) behind the temple of Seti I is a remarkable structure known as the Osireion, but probably in reality Seti's cenotaph. This curious monument is an underground vaulted hall containing a central platform with 10 monolithic pillars surrounded by a channel of water.
Around and between the various temples of Abydos is a vast complex of cemeteries used in every period of early Egyptian history, from the prehistoric age to Roman times. 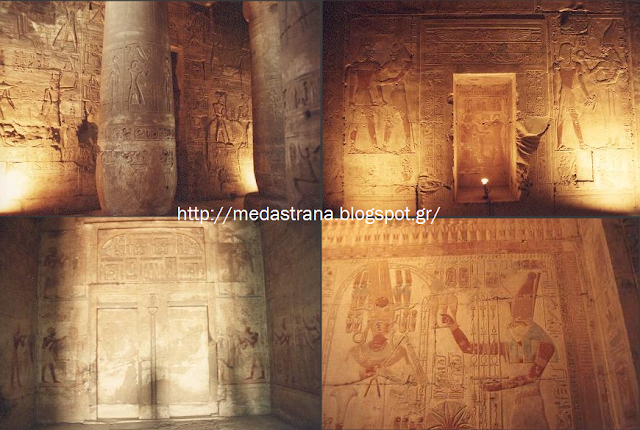