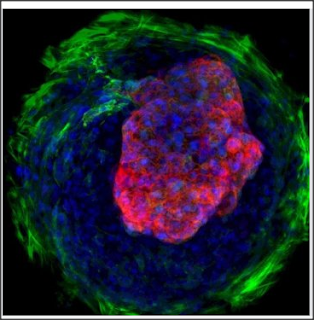 A key to the researchers' technique is a miniature pattern to allow cells to relate to each other in physiologically related ways and establish heart-like interactions in culture. The team, led by Kevin Healy, Ph.D., professor of bioengineering at UC Berkeley, used stem cells generated from a human donor's skin. These adult stem cells are genetically reprogrammed to regain their capacity to become a variety of cell types.
Earlier this year, members of Healy's team reported a similar technique, but one that used already-transformed cardiac cells that mimicked beating cardiac tissue. This new study started with undifferentiated stem cells, which the researchers placed onto the patterned surface that constrained their cell colony shape. Fifteen days after being deposited onto the micro-pattern, cells at the perimeter responded to biomechanical stress and tension, and developed into myofibroblasts, a type of cell with characteristics of connective tissue and muscle. Cells in the interior became beating cardiac muscle cells. Healy and his team were surprised to observe that the stem cells had self organized.
See how your name and birth date affects your life course  "Typically, those cells stay in a 2D format or a multilayer format, but like stacked pancakes," he said. "This is totally different -- they create a microchamber." The new 3D configuration of cells organized into chambers is akin to the pump mechanism of the human heart. In contrast to the outer cells, those in the center expressed proteins for cell regulators of heart tissue development. The researchers then used the new model to assess its potential as a drug screen by exposing the cardiac tissue to thalidomide, a medication known to cause heart defects. They observed that the chamber development was impaired and that the tissue beat at a reduced rate compared with unexposed tissue. "We believe it is the first example illustrating the process of a developing human heart chamber in vitro," Healy said, adding that observations during the 15-day period of microchamber development, "could help us quickly screen for drugs likely to generate cardiac birth defects, and guide decisions about which drugs are dangerous during pregnancy." The U.S. Food and Drug Administration advises pregnant women to be particularly careful about weighing the risks and benefits of taking medicines, noting that not all medicines are safe to take during pregnancy. Even everyday medicines, such as some over-the-counter pain relievers, can be unhealthy for pregnant women and the fetus at certain points during a pregnancy. Women should always consult a health care professional before stopping or starting a medicine while pregnant or while trying to get pregnant. "Dr. Healey and his team have shown us a great example of the power of these microphysiological systems," said Rosemarie Hunziker, Ph.D., director of Tissue Engineering and Regenerative Medicine at the National Institute of Biomedical Imaging and Bioengineering (NIBIB). "By providing the essential components of what makes the tissues work, they can repeat that pattern over and over. Then they can use these similar elements to test many different drug combinations and scenarios. It's an important way to look at a large range of possible drug effects and should help streamline drug development." Their technique is not limited to heart tissue modeling and could potentially be used for other organ types. With further development, such human cell and tissue models could be a possible alternative to animal-based drug screening. Use of human cells and tissue in these micro systems would circumvent the limitations in animal drug testing posed by the biological differences between humans and animals. Healy recently received funding from the NIBIB to refine the cardiac tissue model for drug screening. His team will investigate the biophysical and biochemical conditions that act on developing cells to cause their transition into distinct cell types, such as heart-wall versus interior pulsating cells. The researchers will use healthy and diseased cardiac tissue models in their studies. "If we are successful in completing our aims, this model of early heart development could vastly improve the current approach to screening drugs for safety and pregnancy classification," Healy said. "We also anticipate it would be useful for identifying the genetic and environmental bases of cardiac diseases commonly associated with heart development." In addition to NIBIB, the researchers received funding for their study from the National Heart, Lung, and Blood Institute and the National Center for Advancing Translational Sciences. The NIBIB-funded National Electron Spectroscopy for Chemical Analysis and Surface Analysis Center at the University of Washington, Seattle, performed two types of confirmatory imaging analysis of the researchers' patterned plate surfaces. Story Source:
The above post is reprinted from materials provided by National Institute of Biomedical Imaging and Bioengineering.

A research team funded by the National Institutes of Health has generated a novel system for growing cardiac tissue from undifferentiated stem cells on a culture plate. This heart on a chip is a miniature physiologic system that could be used to model early heart development and screen drugs prescribed during pregnancy. Researchers from the University of California (UC) Berkeley; the Gladstone Institutes, in San Francisco; and UC San Francisco, reported their work in the July 14, 2015, online issue of Nature Communications.
Build your own free professional website easy as 123 - free domain