Does heart disease begin in childhood? 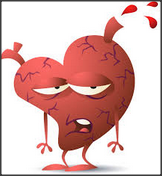 Are the first signs that someone is at risk of developing cardiovascular disease detectable in toddlers and preschoolers?

In a study published today in the journal PLOS ONE, they found a "statistically significant association" between higher vitamin D levels and lower non-HDL cholesterol, even after taking into account such things as Body Mass Index, consumption of cow's milk and levels pf physical activity.

Build your own free professional website easy as 123 - free domain

Maybe the factors that lead to cardiovascular disease start in early childhood," said Dr. Jonathan Maguire, an author on the paper and a pediatrician and researcher at St. Michael's Hospital. "If vitamin D is associated with cholesterol in early childhood, this may provide an opportunity for early life interventions to reduce cardiovascular risk."

For this study, researchers took blood samples from 1,961 children ages one to five years attending well-child visits. All were enrolled in the Applied Research Group for Kids (TARGet Kids!), collaboration between children's doctors and researchers from St. Michael's Hospital and The Hospital for Sick Children. The program follows children from birth with the aim of preventing common problems in the early years and understanding their impact on health and disease later in life.

Children in the study had a mean daily cow's milk intake of 452 millilitres, or just under 2 cups, -- the main dietary source of vitamin D -- and 56 per cent of them regularly consumed a vitamin D supplement.

Posted by Medastrana at 1:54 PM