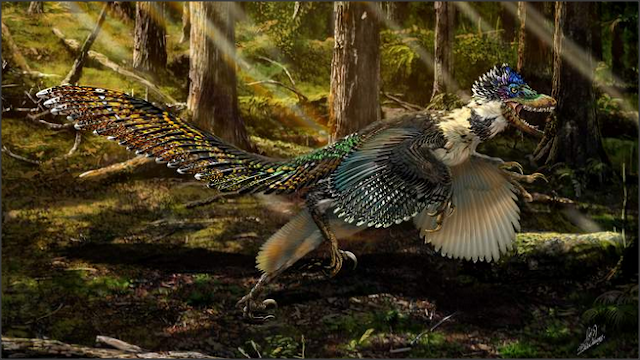 Scientists from the University of Edinburgh and the Chinese Academy of Geological Sciences described the near-complete skeleton as being "remarkably well preserved".
The creature belonged to a family of feathered carnivores that lived about 125 million years ago during the Cretaceous Period. Called Zhenyuanlong suni, the species grew to more than 5ft in length and probably could not fly.

Its wings were very short compared with other dinosaurs in the same family and consisted of multiple layers of large feathers that were complex structures made up of fine branches stemming from a central shaft. Dr Steve Brusatte, a co-author of the study from the University of Edinburgh, said: "This new dinosaur is one of the closest cousins of Velociraptor, but it looks just like a bird.

"It's a dinosaur with huge wings made up of quill pen feathers, just like an eagle or a vulture.
"The movies have it wrong - this is what Velociraptor would have looked like too." Study lead Professor Junchang Lu, of the Institute of Geology, Chinese Academy of Geological Sciences, who led the study, said: "The western part of Liaoning Province in China is one of the most famous places in the world for finding dinosaurs.

"It's amazing that new feathered dinosaurs are still being found."

The study is published in the journal Scientific Reports.

Posted by Medastrana at 1:17 PM